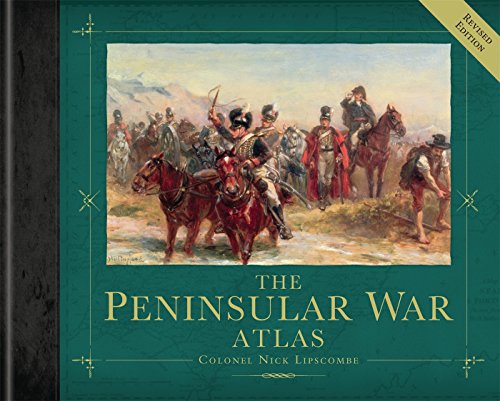 Buy this now. The current price is great. If you wait, the price may increase.

The Peninsular War is one of the defining campaigns of the British Army and sealed its reputation for supreme professionalism, heroic obstinacy and sheer perseverance. It made the reputation of Arthur Wellesley, the Duke of Wellington, and acts as the backdrop to the adventures of Bernard Cornwell's fictional hero Richard Sharpe. The British Army, under Sir John Moore and Wellington, ranged across the plains and mountains of Portugal and Spain and into France, taking part in 15 field actions and four bloody sieges, including Salamanca, Vitoria and Badajoz, but this is only part of the picture. The contribution of the Spanish and Portuguese forces is frequently overlooked, but there were a further 25 field actions and 15 sieges in the Iberian peninsula as part of the savage duel between the French occupiers and native inhabitants. In this newly revised edition of The Peninsular War Atlas, Colonel Nick Lipscombe expands upon his comprehensive, non-partisan examination of the conflict with 164 original maps, accompanied by an authoritative text narrating the war. His 34 years of service in the British Army, including postings in both Spain and Portugal, give him a unique perspective on the conflict. With contributions from Professor Charles Esdaile and the present Duke of Wellington as well as the cooperation of the Spanish and Portuguese authorities, this book is the essential topographical guide to the conflict. The Peninsular War Atlas has been published in collaboration with Peninsular War 200, the organisation established 'to commemorate in a spirit of respect to all and malice to none the 40,000 British (including Irish and foreign-auxiliary) service personnel who lost their lives in the Peninsular War of 1808-14'.
Category Hierarchy